SUP’s new production of family favourite THE RAILWAY CHILDREN pulls into NST Campus in Southampton, 22-25 January 2020. You can book here – and tickets start at just £10 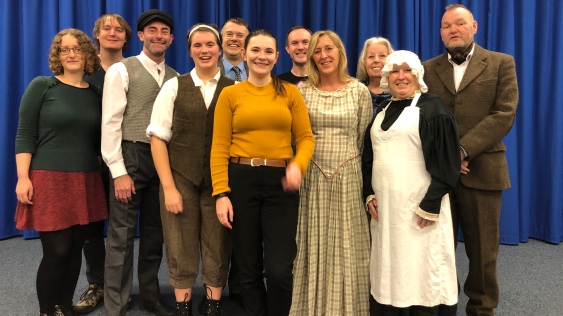 Anna has been with SUP for one year, and has enjoyed being part of both Agatha Christie’s Then There Were None and appearing in SUP’s wartime anthology For The Fallen. She is very excited to step into the role of Mother in The Railway Children, especially as she gets to perform her biggest role to date on the Nuffield stage. Anna has spent many years backstage, so is very grateful for all the opportunities that SUP offers her on stage.

This is Sam’s first show with SUP, having stepped in to play the role of Mr Szezcpansky and some ensemble parts. He is by no means new to the local theatre scene, though, having tried his hand at everything from Shakespeare to musicals. He’s looking forward to his first time on the Nuffield stage, and has particularly enjoyed being able to try out a new accent!

A graduate from the London College of Music, specialising in Musical Theatre for Actors. Rameen has been performing from a very young age and has spent her entire academic career studying: Performing Arts, Musical Theatre, Acting and Dance. Rameen has a keen interest in the Shakespearean era, physical theatre and spoken voice. She makes her return to performing after an eight-year hiatus as a new member of the SUP in The Railway Children.

Deborah has been dabbling in acting and puppetry since the last century, joining SUP in 2018. Her most memorable roles include the Mayor of the Munchkins and a chocolate egg-laying chicken, both with ACTS. She enjoys singing with local natural voice choirs and leading a meditation group – and last December, played Mrs Christmas at Furzey Gardens for SUP/Minstead Trust.

This is Maisie’s first production with SUP. She has been performing since she was 10 and is currently applying to go to drama school. Some of her favourite roles include Anita in West Side Story and Hamlet in an all-female production of the play. Maisie is a keen singer and enjoys writing poetry.

Jamie joined SUP in 2019, and is keen to develop his acting skills. His first role with the company was in the hilariously slapstick The Man On The Floor segment of Neil Simon’s London Suite, performed at the Rose Theatre, Eastleigh in October 2019.

Jenni’s love of acting was ignited when she was an extra in the film A Man For All Seasons whilst at drama school. Over the years she has performed for many local groups, her favourite roles include Vladimir (Waiting for Godot), Lady Booby (Joseph Andrews), Ellie Dunn (Heartbreak House), Lady Capulet (Romeo and Juliet), Paulina (Winters Tale), Red Queen (Alice), Nancy (Sitting Pretty), Caraboss (Sleeping Beauty), Mrs Pearce (Pygmalion), Angela in (Vicars) and Clara (Hay Fever). Jenni is looking forward to The Railway Children – it should be absolutely spiffing!

Paul Green has been acting and directing in the Southampton area for more than 40 years. He joined SUP in 2018 to direct our acclaimed production of Agatha Christie’s And Then There Were None, presented right here at NST Campus in January 2019. For SUP, he also co-wrote, directed and acted in the wartime anthology For The Fallen, which toured various venues and festivals in the summer of 2019. For RAODS, he directed Mary Shelley by Helen Edmondson at The Plaza Theatre in September. He is delighted to be directing The Railway Children as it allows him to use a variety of techniques, including his signature physical theatre style and imaginative stage effects. This production also gives him the opportunity to play with humorous material as, after all, theatre should be fun as well as creative.